Why Hebdomeros7 as the title of this blog? There certainly aren’t six other wordpress blogs devoted to the Giorgio de Chirico novel Hebdomeros, so, why Hebdomeros7 — and not 1 or 2 or 3? The first answer is that the simple and straightforward “Hebdomeros” domain was already taken. Barred from such elegance, I chose “Hebdomeros7” because the title Hebdomeros likely comes from the Latin hebdomas or hebdomad-, which, according to the Oxford English Dictionary, derives from the “Greek ἑβδομάς (-αδ-), for the number seven, [or] a period of seven days.” [Note: In French, hebdomedaire, and its shortened form, hebdo(s), refer to weekly publications such as newspapers, magazines, or other periodicals. Compare to the “weeklies” in English.]

In Greek mythology, the god Apollo is associated with the number seven, and is sometimes called “Hebdomeios,” meaning “of the number seven.” In Ancient Greece, the Hebdomeia or the Ebdŏme was a recurring festival held in Apollo’s honor on the seventh day of every lunar month (Lemprière 428). Similarly, the OED states in its third definition of “hebdomad”: “In some Gnostic systems, a group of seven superhuman beings; also a title of the Demiurge.” Thus, we can trace de Chirico’s baptism of his “metaphysician” as “Hebdomeros” back to Gnostic gods and to the cult of Apollo.

The 1966 Four Seasons publication of Hebdomeros provides another insight into the name through an aspect of the book’s design. On the title page, “Hebdomeros” is split between “hebdom” and “eros”, with each word printed on reverse sides of the same leaf. This aspect of the book design introduces the idea that “Hebdomeros” may be a portmanteau of “hebdom-” (or “Ebdŏme”) and “eros” — a yoking of the several semantic connotations of “hebdom-” as the godlike, the carnivalesque, and the weekly, with “eros” as love or eroticism.

[With regard to this last category of time, I should allow myself the paranoid-critical remark that “Hebdomas” is also the brand name of a turn-of-the-century Swiss watchmaker famous for pioneering the “eight day” watch (a pretty [proto-]surrealist concept right there, though it makes perfect sense in terms of timepiece mechanics). The truly Bretonian moment, however, is that “Hebdomas” began making its eight-day watches in 1888, which was also the year de Chirico was born!]

Lemprière, John. “Ebdŏme.” Bibliotheca Classica: Or, A Dictionary of All the Principal Names and Terms Relating to the Geography, Topography, History, Literature, and Mythology of Antiquity and of the Ancients. Eighth Edition. New York: Collins and Hannay, 1833. p.428

Thanks to Scott Murphy for these scans and a photo of a paperback review copy of the 1966 Four Seasons Book Society edition of Hebdomeros. 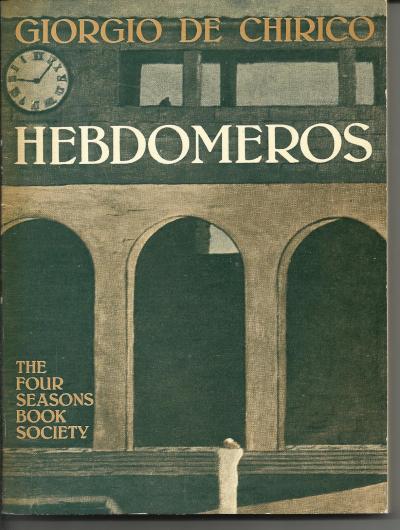 According to Mr. Murphy, a small rectangular piece of paper is glued over the words “of five hundred numbered bound copies” on the copyright page. 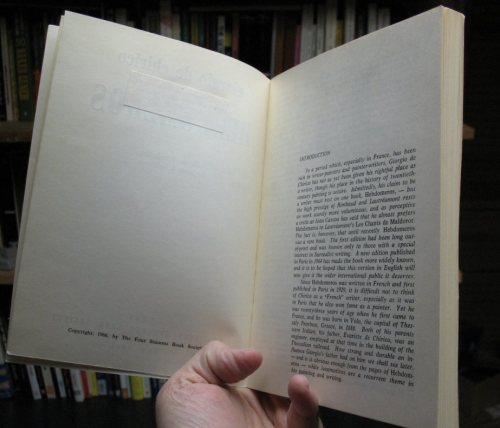 The picture of the spine, I think, is a nice addition: F.S.B.S.

As is the letter from the publishers to the reviewers: 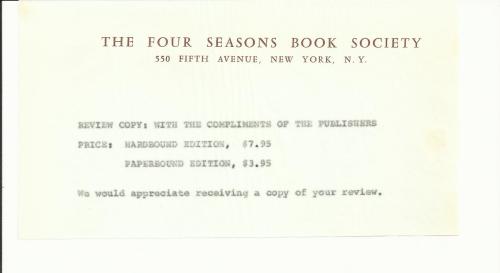 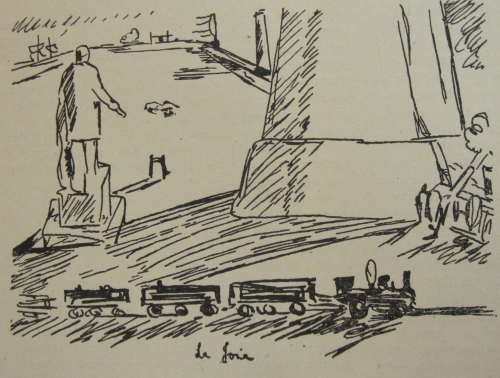 Sketch by Giorgio de Chirico in Arson: An Ardent Review

Translation of a Fragment of Hebdomeros by R.C. Knight: arson_full 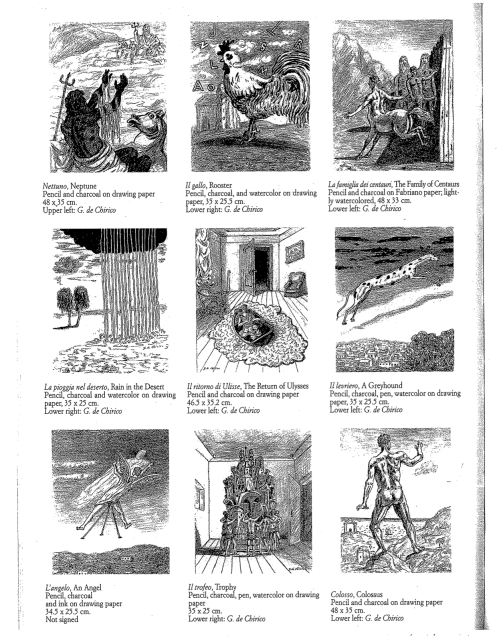 Beginning at number 110: “The following twenty-four drawings are the prototypes made by de Chirico for the lithographs that were to illustrate his novel Hebdomeros (1972 edition published by Edizioni d’Arte Carlo Bestetti, Rome). Carmine Siniscalco’s Incontro con De Chirico… (1988) contains the full series of drawings, each drawing facing the corresponding passage from the novel.”

A scan of the introduction by James A. Hodkinson to the 1966 Four Seasons Book Society edition of Hebdomeros. Number 154 of 500. Also included are the first two pages of the story and the last page which strangely appears to be printed from the bottom of the page up. Perhaps a design decision? Or perhaps it had something to do with a technical feature of the printing press in Belgrade?

The mysteries of Hebdomeros never cease… 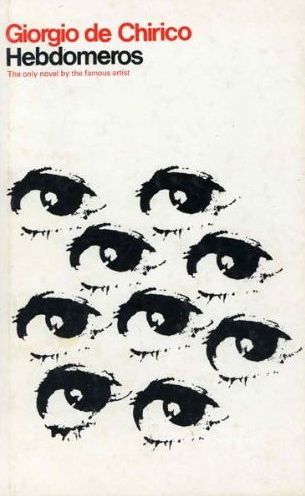 John Ashbery delivers a short lecture on de Chirico, offers remarks on the enigma of the Four Seasons Book Society edition of Hebdomeros, and reads from his own translation from Art and Literature:  ubu.com/sound/ashbery.html

Remarks on the translations are as follows:

“There have been two English translations: One published in England by Margaret Crosland, which I don’t think is a very good one. I checked a few passages and seems rather fuzzy. The other one is this anonymous–well, it’s not anonymous–it has a name attached to it. But the book came out in 1966 and is published by a publishing company that doesn’t exist. I went to the building one time to see if I could get some copies and there was no such place there, –called the Four Seasons Book Society, although the book was printed in Belgrade it says.
“It has a very interesting introduction by someone named James A. Hodkinson who I assume did the translation which is quite good, in fact, it’s extremely good.
I translated a long section from the middle which I will read to you. And I noticed recently that this– That came out before this book did in a magazine, and um, I noticed recently that the translator seems to have leaned very heavily on my translation although in the rest of the book he’s come up with some really ingenious things that I couldn’t have done. So, I don’t know why [e.g. I don’t know why he would have leaned on my translations].”